Bob and Kelly King founded Pacific Biodiesel on Maui in 1995 where they created the first retail biodiesel pump in America. Their clean, renewable biodiesel is produced by recycling waste cooking oils from restaurants statewide. In 2017, the Kings began sustainably farming sunflowers and other biofuel crops on their 115-acre farm in Maui’s central valley and are producing premium culinary and cosmetic oils through their company’s subsidiary Maiden Hawaii Naturals. On Earth Day 2019, the Kings announced that their family farm entity, Imua Energy LLC, has begun Maui’s first state-licensed industrial hemp commercial farming operation, which initially will produce full-spectrum industrial hemp extract, including CBD. Located on 10 acres within the Kings’ central Maui farm, it will be the first industrial hemp farm in the United States powered 100% by biodiesel.

Oʻahu Resource Conservation and Development Council stated, “In addition to stressing the importance of using renewable energy, equipment to conserve water and improve crop infiltration, and recycling of resources, Kelly is a big advocate for increasing plant and soil biodiversity through cover cropping. She points out how this is a particularly important step towards improving soil health as Hawaii transitions from a predominantly monoculture to a diversified agriculture system. Kelly’s company is recycling used cooking oil into a valuable commodity and supplying restaurants with high-quality culinary oils grown from their sunflower and other crops.” 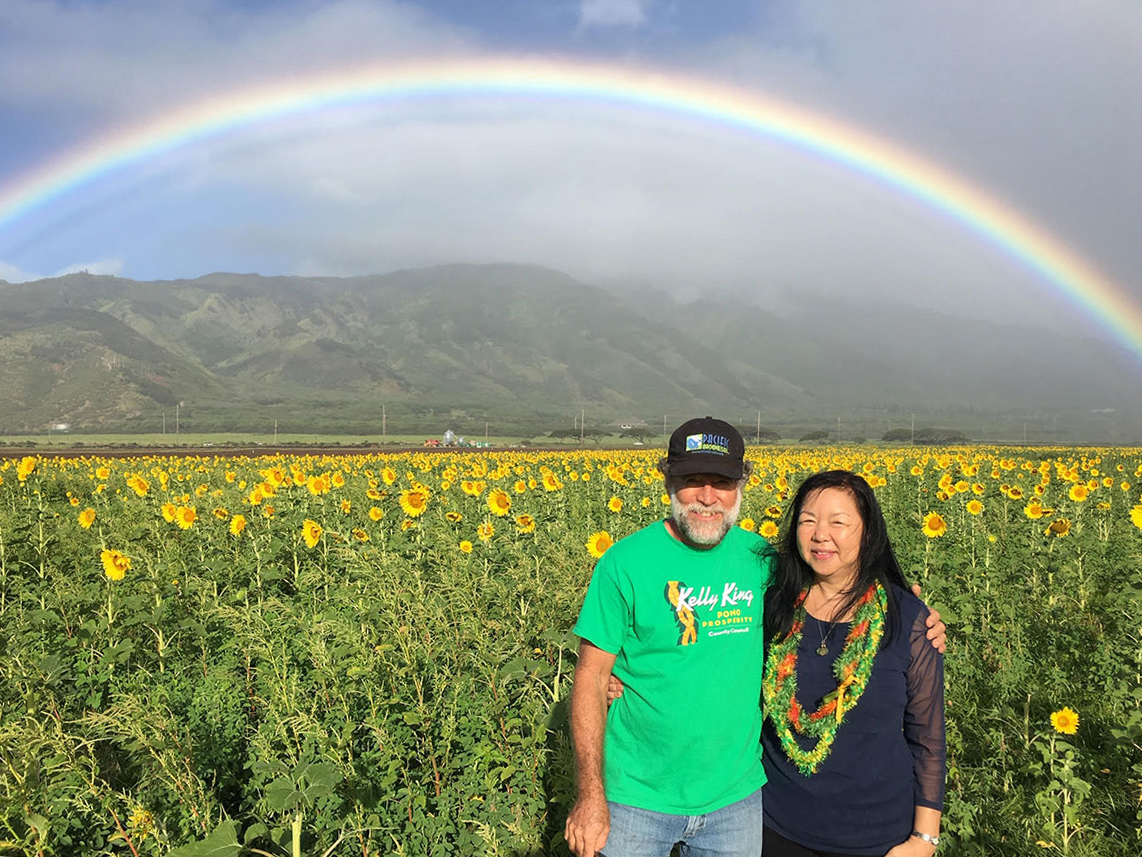 Pacific Biodiesel Begins Farming the State’s Largest Biofuel Crop Project
Maui, HI (February 24, 2017) – Pacific Biodiesel Technologies this morning hosted a Hawaiian blessing to mark the beginning of the company’s scaled-up farming demonstration to grow biofuel crops including sunflowers in Maui’s central valley. The initial crop project on 115 acres will expand diversified agriculture by growing combine-harvested oil crops on land previously used for sugar cane production. This is the largest biofuel crop project in the state of Hawaii and the only biofuel farming operation in the state running on 100% renewable fuel, showcasing the company’s sustainable, community-based model of agriculture and renewable energy. To download the full press release, click here.

Pacific Biodiesel Celebrates First Blooms; Readies for First Harvest at its Maui Sunflower Biofuel Crop
Maui, HI (April 28, 2017) – After hosting an Earth Day community event last weekend to celebrate the first blooms in its Maui sunflower biofuel crop, Pacific Biodiesel Technologies yesterday delivered its combine harvester to the crop site to prepare for the first harvest, expected to begin in the next month when the sunflowers have fully matured. To download the full press release, click here. 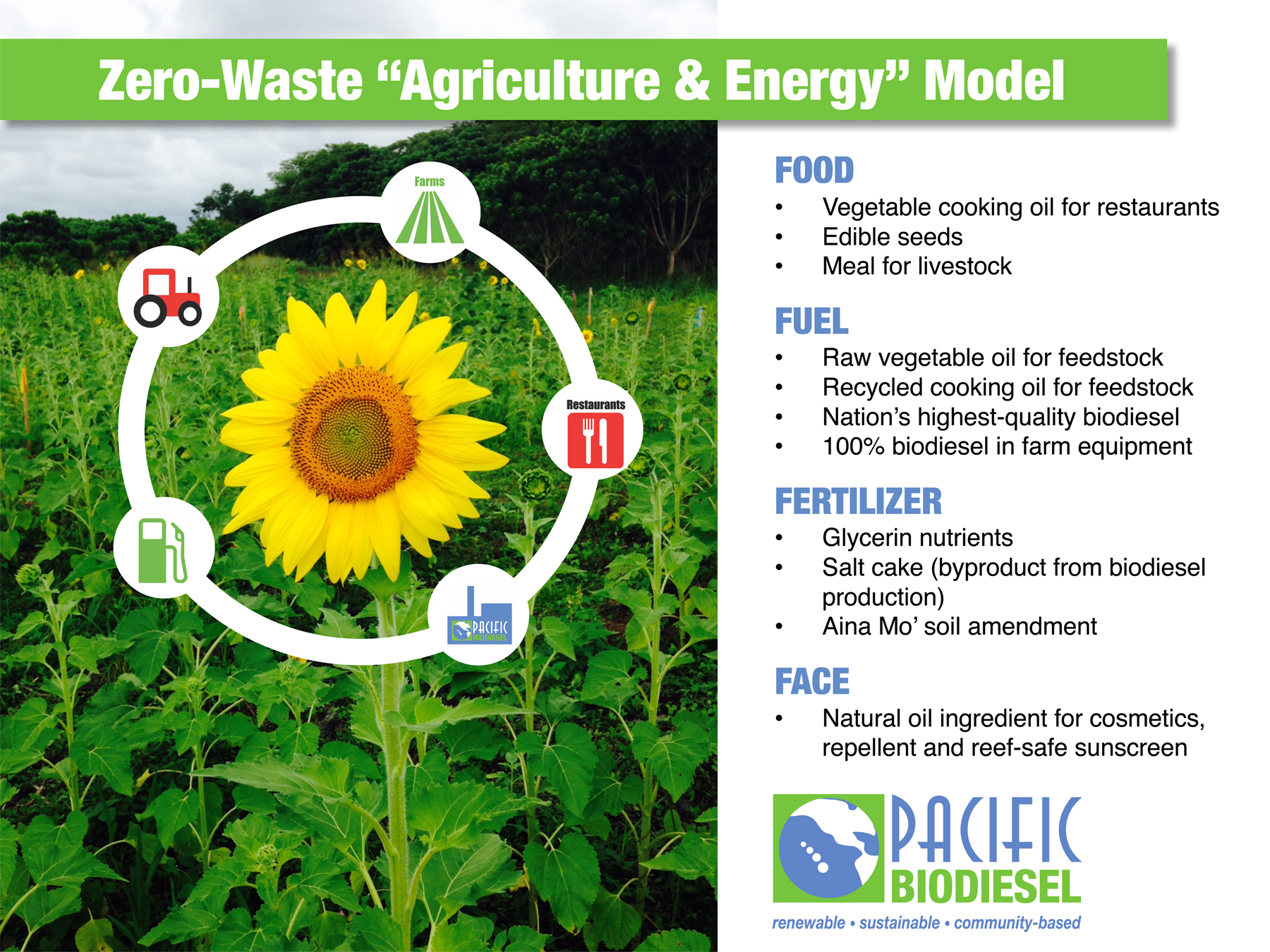 “Isn’t it too expensive to grow crops for biofuel?”

Probably, if that’s the only thing you are planning to use the crop for.  We think the best models (including the one we are pursuing) are those that use all by-products from the crop.  For example, if you can make oil, meal (for animal feed) and silage (for biomass fuel or feed) from one crop and sell all of those then you have a better chance to make money.  Also, our favorite model also takes some of that oil and makes it into higher value products (cosmetic or food oil) and uses that to offset the cost of growing the rest of the oil for biofuel.

“Do you use lots of water and fertilizer/pesticides to grow biofuel crops?”

Some crops do, but we have carefully chosen our crops to be mindful of the inputs.  We also are actively researching and using alternatives to chemical fertilizer/pesticides, including compost from Maui EKO to replace fertilizer and crop rotation to reduce pests.  So far we have used no herbicides or pesticides, and we don’t plan to ever use them.  Our first planting of sunflowers has not been irrigated at all because it was planted in the wet season.  We may need to irrigate briefly during the dry season, but only plan to during the first couple of weeks while they are germinating.  After that, we find that it is best not to water them in order to allow the tap root to develop.

Some can be, like soybean and corn.  However, we have only used non-GMO crops on our demonstration farms.  There are no GMO sunflowers on the market, so all of the varieties of sunflower that we use are traditional hybrids (meaning they were developed by selective breeding, not genetic mutation).

“Your farm is on former sugar cane land. Have you tested the sunflower oil for any residual chemicals?”

We test our soil for micronutrients and when we first began farming on this land in 2017, we looked at what chemicals were applied to the field previously (all of those were registered and approved for food-grade crops). Nothing had been sprayed on this fallow land for at least 2 or 3 years prior to us beginning our farming operations. The soil has been further remediated by our farming of sunflowers and cover crops on this land for more than two years. We had initial batches of our sunflower oil tested by a third-party lab; all results were below detectable limits, far below the point of any concern. We continue to farm using the most natural process that we can, with no pesticides, no herbicides and no GMO crops. We are very confident in the quality of our natural products produced from this farming operation.

“I heard you are importing feedstock for your current production.  Isn’t that the same as importing fuel?”

We collect and receive almost all of the used cooking oil produced in Hawaii, but we do have to import some waste oil material in order to get our Big Island plant to full production.  We estimate that there are 2 million gallons/year of UCO produced in Hawaii and our plant is a 5 million gal/year capacity.

We have always viewed importing used cooking oil as a short-term solution to getting our Big Island plant to full operations.  We are moving forward as fast as we can with developing/growing local crops that we can grow to replace the imported waste feedstock.  Our long-term goal is to fill our Big Island plant with 100% local feedstock.

In the short-term, importing waste cooking oil is still better than importing petroleum because our fuel is much better for the environment and we create local jobs since our fuel is processed in Hawaii.

“Do you have plans to expand your biodiesel plant?”

Also, when we do get to the point where we can expand biodiesel production, we would prefer to build another facility rather than expand our current one.  This is because we favor distributed production over consolidated production.  By expanding our production facilities across the state, we can reduce shipping of feedstock and fuel interisland, as well as expand jobs throughout the state.

“Most of the fuel is used on Oahu, so why is your biodiesel plant on the Big Island?”

Our biodiesel plant was designed to have greater capacity than the amount of used cooking oil available in Hawaii so that we could stimulate local biofuel crop production.  The Big Island has a strong agriculture industry and lots of available land, so we think it has great potential to grow enough oil to eventually provide enough feedstock for our Big Island plant.

“Why did you choose to grow sunflower?”

We like sunflower because it provides a high quality oil (which can be used for cosmetics or food, plus biofuel) and a good meal product (for livestock feed).  It has a high oil content, plus looks beautiful! (good for agri-tourism).  While sunflower is our first rotation crop, we will be planting other crops soon.  Keep an eye out to spot the next one!

“How is your biodiesel used throughout the state?”

Currently the bulk of our fuel is used for utility power generation.  In the long-term we think the most valuable use for biodiesel will be in heavy-duty transportation, because biodiesel is a dense form of liquid energy (great for hauling around in trucks or ocean tugs).  There are lots of other renewable options (i.e. wind/solar) for the electric grid, and we hope that our utilities continue to pursue all of them as much as possible.  However, we do also think that biodiesel is a good “backup” to the grid because it can fuel a peaking power plant to stabilize the grid when solar or wind drop off.  This is exactly what HECO’s biodiesel-fueled CIP power plant is designed to do (and currently how they use it), so we think that using our fuel this way is a great thing.

We also are glad to have diverse markets for the fuel, because this year with crude oil prices low we find it harder to sell into the transportation market.  It is a benefit that biodiesel can be used in any diesel engine or turbine, so our fuel works for lots of different applications.  Besides power generation, biodiesel is currently used in cars, trucks (passenger and heavy-duty), tractors, boats, shuttle buses and even ambulances.  It is available in retail stations on Maui, Oahu and the Big Island. Click here to learn where you can buy biodiesel statewide.