BIODIESEL BENEFITS – WHY USE BIODIESEL?

The smartest technologies deliver benefits to multiple interests, including improved economy, and a positive impact on the environment and governmental policies.

The role of the biodiesel industry is not to replace petroleum diesel, but to help create a balanced energy policy with the most benefit to the United States. Biodiesel is one of several alternative fuels designed to extend the usefulness of petroleum, and the longevity and cleanliness of diesel engines.

The ultimate goal is to contribute to building a stronger, more self-sufficient community by way of a community-based biodiesel production model. A community-based biodiesel distribution program benefits local economies, from the farmers growing the feedstock to local businesses producing and distributing the fuel to the end consumer. The money stays in the community while reducing impact on the local environment and increasing energy security.

The links below provide more in depth information on the benefits of biodiesel.

All diesel engines and vehicles can use biodiesel or biodiesel blends. Certain older vehicles built before 1993 may require replacement of fuel lines which contain natural rubber, as biodiesel can cause these lines to swell or crack.

Also, newer diesel vehicle models of Volkswagen, BMW and Mercedes (2007 or later) have a fuel system that utilizes a Diesel Particulate Filter (DPF) that can create a fuel/oil dilution in the diesel engine, whether diesel or biodiesel fuel is used. Over time the engine oil could be diluted by the fuel if certain precautions are not taken. One recommendation is to ensure you are running your diesel engine regularly. And, if you use 100% biodiesel in these vehicles, you must change the oil at least every 3,000 miles and check your oil level regularly (this is not an issue with vehicles using biodiesel blends, such as B20). Contact our biodiesel fuel experts here if you have any questions.

Blending and Switching with Diesel Fuel

Biodiesel can be used 100% (B100) or in blends with petroleum diesel fuel. Blends are indicated by B##, which correspond to the percentage of biodiesel in the blended fuel. For example, a 20% blend of biodiesel with 80% diesel fuel is called B20. When biodiesel is first used in a vehicle, it may release fuel tank deposits which can lead to fuel filter plugging. After this initial period, a user can switch between biodiesel and petroleum diesel whenever needed or desired, without modification.

The presence of biodiesel pumps at fueling stations across the country grows daily. To find sources of biodiesel near you, click here.

I want my MPG!

Superior Lubrication for Your Engine

Just like petroleum diesel fuel, biodiesel can gel in cold weather. The best way to use biodiesel during the colder months is to blend it with winterized diesel fuel.

Biodiesel is the only alternative fuel to successfully complete the EPA’s rigorous emissions and health effects study under the Clean Air Act. Biodiesel provides significantly reduced emissions of carbon monoxide, particulate matter, unburned hydrocarbons, and sulfates compared to petroleum diesel fuel. Additionally, biodiesel reduces emissions of carcinogenic compounds by as much as 85% compared with petrodiesel. When blended with petroleum diesel fuel, these emissions reductions are generally directly proportional to the amount of biodiesel in the blend.

The reduced particulate and unburned hydrocarbons emissions that result when using biodiesel are a welcome relief in environments where workers and pedestrians are in close proximity to diesel engines, including public transport, mining, and construction. In addition, when high blends of biodiesel are used, the exhaust from diesel engines is often described as smelling like fried food, which aside from causing increased hunger in those nearby, is a welcome relief from the smell of diesel fuel exhaust.

A Clean Alternative Fuel for New and Old Engines

Diesel engines have long had a reputation of being “dirty” engines. However, with the advent of newer diesel engines equipped with exhaust gas recirculation (EGR), particulate filters, and catalytic converters, clean diesel technology provides incredible fuel efficiency with ultra low emissions levels. When coupled with the use of biodiesel, both new and old diesel engines can significantly reduce emissions, including particulate matter (black smoke).

A Closer Look at Emissions Reduction

Studies on biodiesel emissions have been conducted for almost 20 years. In that time biodiesel has undergone the most rigorous testing of any alternative fuel, having been the first and only fuel to be evaluated by the EPA under the Clean Air Act Section 211(b). This study examined the impact of hundreds of regulated and non-regulated exhaust emissions, as well as the potential health effects of these emissions. Some of these results are summarized below.

4 “A Comprehensive Analysis of Biodiesel Impacts on Exhaust Emissions”, https://www.epa.gov/otaq/models/analysis/biodsl/p02001.pdf

Grown, Produced and Distributed Locally Worldwide, energy security is becoming a hot topic in government and society. Nearly every country in the world depends on imports of various forms of fossil fuel energy, including oil, coal and natural gas. Without a steady supply of affordable energy a country’s economy grinds to a halt, with no fuel for transportation, energy to run power plants and factories, or heat homes. Biodiesel can improve energy security wherever it is produced in several ways:

Domestic Energy Crops When crops used to produce biodiesel are grown in the country in which the fuel is consumed, each gallon of biodiesel displaces a gallon of imported crude oil, reducing a country’s dependence on foreign oil supplies.

Difficult Targets When biodiesel is produced, distributed and used locally in a community based model it presents a much more difficult target for a potential terrorist attack than large centralized facilities like oil refineries or pipelines used in the petroleum industry.
In the United States, the biodiesel industry is supported by the Energy Policy Act (EPAct) compliance strategy. This legislation allows EPAct-covered fleets (federal, state and public utility fleets) to meet their alternative fuel vehicle purchase requirements simply by buying 450 gallons of pure biodiesel, and burning it in new or existing diesel vehicles in at least a 20% blend with diesel fuel. The Congressional Budget Office and the U.S. Department of Agriculture have confirmed that the biodiesel option is the least-cost alternative fuel option for meeting the Federal government’s EPAct compliance requirements.

Toxicity, Biodegradability, Safety & Recycling
Though it is uncommon for the average person to come into direct contact with fuels, occasional spills do occur, and the impact of the fuel on plants and animals must be considered. Biodiesel has been proven to be much less toxic than diesel fuel, and is readily biodegradable. These attributes make it less likely to harm the environment if an accidental spill occurred, and far less costly to repair damage and clean up.

Less Toxic than Table Salt
Being derived from vegetable oils, biodiesel is naturally non-toxic. The acute oral LD50 (lethal dose) of biodiesel is more than 17.4 g/Kg. By comparison table salt (NaCl) has an LD50 of 3.0g/Kg. This means that table salt is almost 6 times more toxic than biodiesel.4

Aquatic Impacts
In an aquatic environment, biodiesel is 15 times less toxic to common species of fish than diesel fuel.4

Biodegradability
In both soil and water, biodiesel degraded at a rate 4 times faster than regular diesel fuel, with nearly 80% of the carbon in the fuel being readily converted by soil and water borne organisms in as little as 28 day.4

A Safe and Stable Fuel
Biodiesel is safer to handle than petroleum fuel because of its low volatility. Due to the high energy content of all liquid fuels, there is a danger of accidental ignition when the fuel is being stored, transported, or transferred. The possibility of having an accidental ignition is related in part to the temperature at which the fuel will create enough vapors to ignite, known as the flash point temperature. The lower the flash point of a fuel is, the lower the temperature at which the fuel can form a combustible mixture. For example, gasoline has a flash point of -40 F, which means that gasoline can form a combustible mixture at temperatures as low as -40 F. Biodiesel on the other hand has a flash point of over 266 F, meaning it cannot form a combustible mixture until it is heated well above the boiling point of water. It is rare that fuel is subjected to these types of conditions, making biodiesel significantly safer to store, handle, and transport than petroleum diesel. In fact, the National Fire Protection Association classifies biodiesel as a non-flammable liquid.

Recycling: Recovering Energy Resources
Biodiesel can be made from many different oils and fats, including many waste products. Waste cooking oil, normally disposed of or used in animal feed mixtures can be converted to high quality biodiesel using a process employed by companies such as Pacific Biodiesel Technologies. The use of used cooking oils as a biodiesel feedstock has increased their value significantly in recent years, making proper collection and recycling of these oils more cost effective, and lowering the volume of these oils destined for sewers and landfills. Other low value oils and fats which can be made into biodiesel include yellow grease, inedible tallow, and trap grease. In one example of the benefits of how biodiesel production can increase recycling, the Pacific Biodiesel production facilities in the Hawaiian islands have diverted nearly 190,000 tons of used cooking oil and grease trap waste since they began production.

Energy Dollars Stay In Communities
Since biodiesel is a fuel which can be created from locally available resources, it’s production and use can provide a host of economic benefits for local communities. The community-based model of biodiesel production is particularly beneficial. In this model, locally available feedstocks are collected, converted to biodiesel, then distributed and used within the community. This model keeps energy dollars in the community instead of sending them to foreign oil producers and refineries outside the community. The peripheral benefits of this type of model are different for each case, but can include:

Sustainable Farming and Value Added Agriculture
Biodiesel feedstock can come from a variety of agricultural crops. When these crops are grown in a sustainable manner, using good stewardship practices, there are long term benefits to farmers, farming communities and the land. Many crops which yield oils used for biodiesel production can be a beneficial rotation for other food crops, including soybeans when used in a traditional corn rotation, and canola when used in a wheat rotation. Using crops in rotation can improve soil health and reduce erosion. The overall impacts of growing energy crops are complex, with thousands of variables. However, the added value created for oilseed crops by the production of biodiesel is a tangible benefit for farming communities, and when coupled with sustainable farming practices can provide benefits to farming communities and the environment.

Sustainable Biodiesel Production
Since there are multiple feedstocks from which to make biodiesel, plant operators can opt for the least expensive feedstock currently available, if they have a multiple-feedstock system. This flexibility makes producers less subject to price fluctuations.

One example of this is noted by the prices of soybean oil. Its price has doubled in recent years, and is predicted to continue to rise according to a 2001 study by the U.S. Department of Agriculture. The study projects a total cash crop increase of $5.2 billion by 2010 — an average net increase to farms of $300 million per year — with soybean prices increasing 17 cents per bushel annually over that period.

Everybody Wins
Ultimately this creates multiple beneficiaries of the production of biodiesel. By virtue of a successful market and feedstock flexibility, plant operators and farmers can both continue to operate in a marketplace with increases in revenue projected to bring $24 billion to the U.S. by 2015. 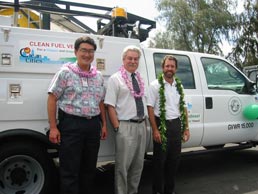