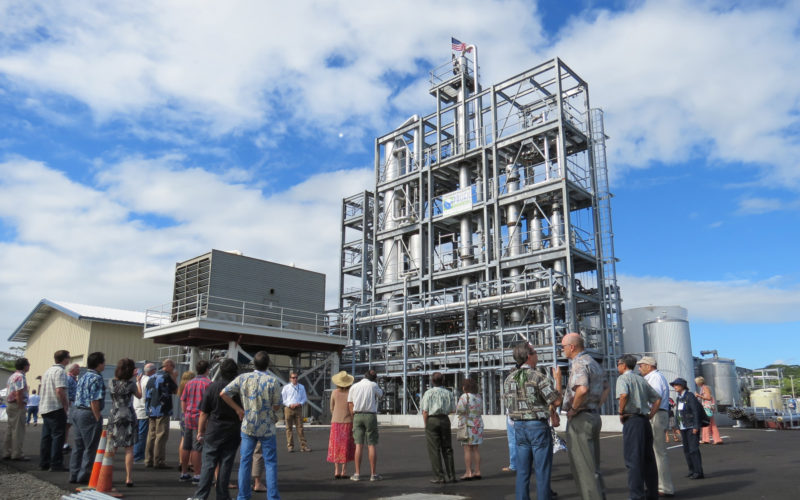 With a nameplate production capacity of 5.5 million gallons annually, Pacific Biodiesel’s refinery on Hawaii Island utilizes state-of-the-art distillation technology to produce the nation’s highest quality biodiesel and on Earth Day 2016 became the first facility in the world to be certified by the Sustainable Biodiesel Alliance for its sustainable production and distribution practices. Today, Pacific Biodiesel is Hawaii’s only commercial producer of liquid biofuels.

Below are some highlights of our advanced biodiesel process technology:

Keaau, HI – Another step toward energy independence was celebrated July 2, 2012 at the grand opening of Pacific Biodiesel’s advanced biodiesel production facility in Keaau, Hawaii (pictured above). The project was the brainchild of Robert King, Founder and President of Pacific Biodiesel Technologies. With this opening, the State’s biodiesel production capacity increased 500%, to 5.5 million gallons per year.

At its grand opening event, Pacific Biodiesel hosted some of Hawaii’s most influential dignitaries as well as speakers from the U.S. Department of Energy, U.S. Department of Agriculture, and the Environmental Protection Agency. The Independence Day themed event and barbeque were held at the Keaau site and included remarks from United States Senator Daniel K. Inouye and Hawaii Governor Neil Abercrombie. “Let’s not blink this time,” said Senator Inouye, referring to the early development of renewable energy, prompted by the oil crisis in the 1970’s, which died when petroleum prices dropped. Governor Abercrombie praised the local investment in the project, saying, “this is a commitment to renewable, this is a commitment to alternative, a commitment to energy itself and its role as a central feature of what it means to survive as a democracy in these Hawaiian Islands.”